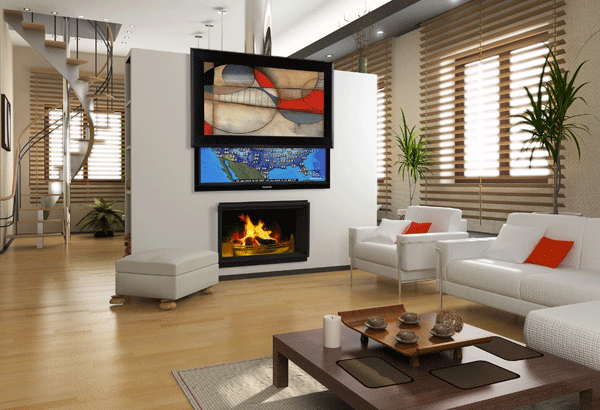 When planning innovative interior designs, attention usually focuses on integrating the look of the furnishings, floor covering, wall textures and the installation of stylish lighting to set it all off. The smooth blending of a room’s video system may go overlooked. Since large screen TVs differ little in appearance between models, you may think that their appearance diminishes the interior’s unique look.
Fortunately, avoiding such a problem is easily solved with an automatic TV lift. TV lifts are the perfect way to entirely hide a TV and eliminate any subtle clash with the overall decor. Additionally, they provide a cleaner and more open look to a room. Depending on how you inventive you are about the concealment, lifts can even enhance the interior with a dash of high-tech elegance.

Innovative TV concealment is not limited by lift technology itself. Various manufacturers design the mechanics of their systems to accommodate moving any TV, from tube types to LED screens, in almost any direction. Your imagination is free to envision the most stylish and functional ways to place the TV out of the picture.

• Vertical lifts can be used to raise a TV from behind or from within a floor cabinet. When lowered, the cabinet will show a level top surface. These kinds of lifts also allow a TV to be lowered from the ceiling or from behind a false partition.

• Horizontal lifts move a TV right or left from behind a concealing partition such as a painting chosen to accent the room’s décor.

• Swing lifts do not actually lift a TV per se. Instead, they support the TV from one side in a hinge manner. A motor swings the TV across an arc of up to 180 degrees in order to match the viewing angle to the seating arrangements. Swing lifts can be used to hang a TV from a ceiling too. In this application, the TV screen is stored in a horizontal position and swung down vertically when being viewed.

• Projector lifts are specifically designed for projection TV systems. Typically, they mount on the room’s ceiling and lower the projector vertically. Additionally, they can be used to raise a projector from within a cabinet that is located near the centre of a room.

Most TVs are not lightweight objects especially ones that use tubes for the screen. The lifts themselves are normally constructed with heavy-duty rail guides and stout gas springs to compensate for the weight of any television or monitor. The mechanisms to raise and lower the TV utilise gears or hydraulics to gain advantage using small motors.

The most important element in TV lift installation is the use of a substantial and durable structure for supporting the lift. This aspect is not as critical if the lift is attached to the floor. For a horizontal, swing or ceiling mounted lift, a strong mount point is absolutely necessary. Keep this requirement in mind when using a TV lift. A good design will ensure that the attachment structure blends well with other interior design elements.

Besides the example of using a vertical lift to hide a TV within a floor cabinet, there are other techniques to hiding the television. For instance, a lighted aquarium with tropical fish is an attractive focus point for any room. With simple wiring and the touch of a button, the aquarium lights are turned off while a TV screen rises from behind it.

Instead, with some customisation, a lift could lower an aquarium to reveal a wall-mounted television. The same idea could be implemented with a planter box instead of an aquarium. You can combine the idea of concealment behind a painting using a fixed-position TV too. Lifts can be attached to two smaller paintings that create a single piece of artwork. The lifts separate the two halves horizontally to reveal the television. Instead of a painting, the two halves could be flat speakers with attractive covers, which are a part of the TV sound system.

If any of the ideas that you have to use TV lifts for concealment do not match up with offerings of a particular manufacturer, do not give up hope. There are kits on the market that can be customised to fit your particular application. Besides lifts, there are some products that might work better for your particular situation. For instance, there are table or floor mounted mechanisms that will automatically twist a television in a full circle, which might work well for a TV that is centered in a room.

The Final Word in Style and Luxury

A television’s place in your home’s fashion statement no longer needs to be an overlooked rough spot. With a stylish concealment made possible with an automatic TV lift, it becomes an integral part of the design that also provides high-tech convenience. A single push of a button brings the television to life or slides it out of sight when company comes to call.